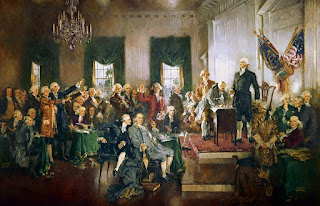 A lot of people don't understand the Electoral College. It's their own fault. I mean, it's been around since 1789, so there's no reason to not know about it. But, a lot of people still don't.

Briefly, it's the group of people that actually elect the President of the United States. And, it's been that way since the Constitution was first ratified.

The thing that should really be understood is the "why." Why in the world would we have such a system. Well, you need to learn a little history.

Before we get to the Executive Branch, let's quickly cover the Legislative Branch.

The delegation from Virginia, the most populous state at the time, wanted each state to get representatives in proportion to their population. The more populous states would get more representatives. The problem with that, though, is that four of the 13 states would be able to push through anything despite objections from the other nine states. (Actually, the four largest states were one shy of a majority, so they would need to convince one, but only one, representative of the other states to go along.) The smaller states didn't like that.

The delegation from New Jersey, one of the smaller states, wanted each state to have an equal number of representatives. That meant the concerns of New Jersey or Rhode Island carried as much weight as Massachusetts or Virginia. The problem with that was the seven smallest states, which had only one third of the population, could push through legislation that two-thirds of Americans didn't want. The larger states didn't like that.

So, the solution was to implement both plans. The Legislative Branch would consist of two bodies, representing both the people and the states.


Of the three branches, one part of Legislative Branch was the one selected by the people to represent the people. But the Executive Branch? How to deal with that?

It was decided that each state would be granted Electors to choose the President, equal to the combined number of Representatives and Senators. Each state would determine how to select the Electors. Some were chosen by the state legislature, and some were selected by the people. In the first election (1789) of the ten states that participated, half the states voted on the Electors, and half were appointed by the state legislatures. In the second election (1792), of the 15 states, ten selected Electors by the legislature and five by votes of citizens.

One other thing. Originally, the Electors cast two votes. Whoever got the most was President and whoever came in second was Vice-President.


The Supreme Court was then filled by the other two branches of the government. The President appointed judges to the Court, but the Senate had to approve the appointments. Justices served for life.


There are complaints by some, or by many, about how unfair it is that they don't get to elect the President. Well, that's the whole point. The Founding Fathers gave me, you, and all citizens our voice in government through the House of Representatives. They gave the states (us collectively by state) a voice in the Senate. They gave the states the ability to choose those that would choose the President.

If you think you should have the say directly, keep in mind that George Washington, James Madison, Thomas Jefferson, and the rest of the Founding Fathers said otherwise. Take this any way you want: I trust them more than I trust you. Or me.
By Basil at 11/10/2016 12:30:00 PM