Say "Hello" to my little friend

I hate the stuff.

I've also used Microsoft Outlook's filter ... and it's pretty good ... as well as Thunderbird's filtering ... which is also pretty good, but, to me, not as good as Outlook's. And, yes, I'm talking Outlook, not Outlook Express.

On my MacBook, though, I'm pretty limited. But, as it turns out, Apple Mail and Microsoft Entourage (Microsoft Office:Mac's email program; Outlook isn't part of Office:Mac) have good filters, and they seem to work as well.

But there's one thing about the spam filters I use that causes irritation.

First, and foremost, the fact that I need to use them. That's irritating.

Second, spam filters aren't perfect. They sometimes let spam through. And they sometimes flag some email as spam that isn't.

That means that unless I want to take the risk of missing an email that I really don't want to miss (and, yes, some friends to email me and get caught in the spam filter), then I need to have it keep the spam for a period of time before deleting it. 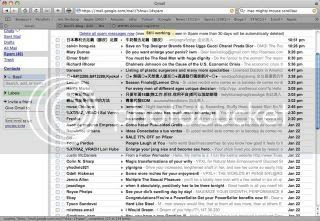 So, for Gmail, I'll through the spam folder 5-7 times a week.

Usually, there's nothing there I want to see. But, I check anyway, just in case.

And that means that, for all the trouble I go through to avoid spam, I end up looking at the crap anyway.

Some are trying to sell me Windows Vista or Microsoft Office dirt cheap. Some want to sell me a Rolex. Some want to give me $50,000,000 to transfer from the East African People's Republic via Barrister Dewey Cheatham.

Then there's the spams that want to help me with my penis.

Okay, I realize I'm not John Holmes. Or Ron Jeremy. Never claimed to be.

And, judging by the spam I've been receiving, I've been selected to replace them.

At least, that's the only reason I can see that I'm being bombarded with hundreds of offers to increase my "manhood" by several inches.

But I don't think I want the job. They might want to offer it to Smilin' Bob. He seems to have enough to go around.

Heck, if all those things worked and I took them up on all those offers, I'd be scaring elephants.