I miss Leonard's Losers. If you never heard Leonard Postero's show, where he picked the outcome of college football games as Leonard Postosties, then you really missed something. He was witty, and he knew his football, right way more often than wrong.

If he was still with us, I like to think it might go like this. It wouldn't. It'd be a lot funnier and a lot more accurate: 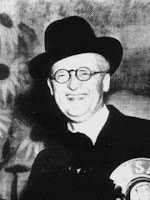 This is the day that football fans have been waiting for. It's the Saturday where all the conference championships are settled, as well as the only championship that matters: and that's for the Southeast Conference.

It's been a long time since I've had to fire up the ol' Smartpill Machine. It broke down and was placed in the Big Junk Room In The Sky back about 20 years ago, and I followed not too long after.

Still, I've never been one to let one of life's little obstacles keep me down for too long.

The Little Smartpill Machine is fired up and ready to go ... and so am I. We'll take a look at the most important games this weekend coming up after this message from our benefactor.

The cocky Cocks from Columbia earned a rematch with the Big Kitties from the Plains despite posting a 5-3 record in the SEC.

Cam Newton has shown himself to be worth every penny with his play this season. He's led the East Alabama Cow College to the top of the football world, and he has the chance to nail down the Heisman simply by not losing.

Steve Spurrier returns to the SEC Championship Game with the best team in the East ... and the worst team he's ever taken to the big hoedown in Atlanta. He's 6-and-1 in the conference championship, and knows how to win this game. But his players don't.

These two teams met in September, with the Roosters jumping out to the early lead, but the Cats coming back in the 4th quarter to take the win.

Spurrier might be the better coach, but Auburn is the better team. Leonard's Loser, in a close one: South Carolina. 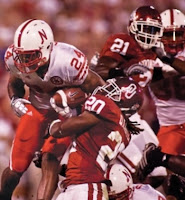 The Big Red Thrashing Machine has run roughshod over the competition this season ... except for two small speedbumps.

The Wagonmasters from Norman have had a good run as well, although their stumbles seemed to be a bit worse.

In the days of Big Eight football, this game was always a classic. Now that they are in separate divisions of the Big 12, they don't play nearly as often. And with Nebraska making the jump to the 11-team Big Ten, these old rivals will only meet on New Years Day from now on.

This one could be a great one that won't be decided until the fourth quarter ... or beyond. Leonard's Loser, in another close one, Oklahoma.

Once upon a time, this used to be a battle of top five schools. Nowadays, it's a battle just to get to the ACC championship game.

After beginning the season as the Chokies, the Polytechnicals have put together an impressive run after falling to a bunch of Smurfs and one of the Founding Fathers. The upside is, they've made mincemeat out of the competition. The downside is, the competition is a worse-than-normal ACC.

The Semi-holes have had an up and down season. They proved they were the best team in Florida, but only the third-best team in North Carolina.

Jimbo Fisher's North Florida Tribe took care of business when they needed to, and are looking to leave Charlotte with some Old Hokie scalps. But they need to watch out. Frank Beamer's cadets know how to handle themselves.

We'll be back after this word from Dear Old Dad... 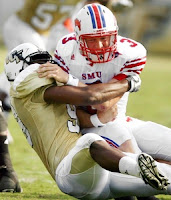 Nobody knows how a bunch of Wild Horses from the Dallas area ended up in the Conference-USA championship game, unless John Wesley asked a favor from the Almighty. But make it they did. Last year, June Jones led his Mustangs to their first bowl game since coming back from the dead. This year, they can take a conference championship trophy with them when they go bowling.

But first, they have to get by George O'Leary's Knights from Orlando. Central Florida has has sole possession of their division since late October, so their appearance in the game isn't because of a padded resume.

SMU has a lot to be proud of. Today won't be part of that.

Here's Leonard's List of Likely Losers:
And next weekend, Army will lose to Navy.

Well, the Ol' Smartpill Machine is due for an oil change, and I'm due for a long rest.

Till next time, this is Leonard Postosties saying, "So long, neighbor!" Get me outta here, Percy.

Leonard will be back next time with another bunch of losers. Till then, this is Percy Peabody ... hoping you'll be with us.

Oh, how I miss Leonard.

There are plenty of ways to hear predictions about college football games. You got College Gameday, plus all sorts of sports channels on TV and radio, blogs and whatnot. But nothing ever compared to Leonard's Losers. 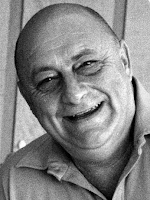