Getting a new bumper sticker, a follow-up

A little over a year ago, I decided to get a new bumper sticker for the car.

My older bumper sticker was ... well ... in need of replacing. 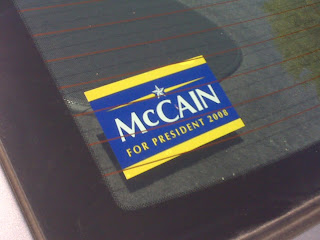 Okay, it was a window sticker. And it was way out-of-date.

And sort of lame, as I mentioned at the time:


Now, yes, I know, it's pretty lame to keep a bumper (or window) sticker up after the election. And I'm lame for still having it up.

But, I want to let people know this: I did not vote for Barack Obama.

Well, it's now 916 days since the election, and I finally took the McCain sticker down.

I got a lot of suggestions, both at my little blog and at IMAO.

While some of them were excellent suggestions, I waited.

Well, the wait is over. I now have my new sticker. 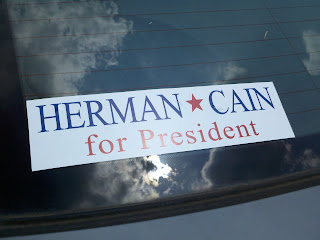 It's actually a bumper sticker. But, being me, I put it on the window.