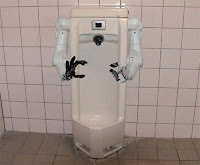 Scientists in Bristol are developing robots that run on urine.

They've built a pee-pump that will, um, pump pee, or something. Apparently, regular pumps won't get near pee. Although I can think of many waste treatment facilities that don't know that yet.

Anyway, these British scientists have developed a pump for pumping urine that will be used to power EcoBots. And, it seems, EcoBots are robots that run on waste. Like pee.

These are the same people that developed a cell phone that runs on pee.

I'm seeing a pattern here. Somebody there has a urine fetish. And, they're trying to monetize it. Golden showers of money, so to speak.

What I'm seeing is trouble.

There are going to be robots that don't just run on, but crave, human urine. And, they'll have cell phones, so they can call up their robot friends and surround some poor slob and steal his pee.

But, with a cell phone, a robot can order a plane ticket and fly to the U.S. and hunt you down. They'll no trouble getting past security, because those jackasses are too busy patting down 90-year-old grandmas and putting two-year-olds on no-fly lists to worry about a pee-drinking robot wandering on to a plane.

So, be ever vigilant and watch out for the pee-craving robots.