Today's forecast: A chance of devastating destruction increasing throughout the day 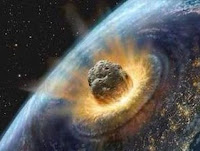 You ever watch those Discovery Channel shows where they talk about the Chicxulub asteroid or the Tunguska event? There's always Neil deGrasse Tyson or somebody talking about how some big asteroid event will happen again... eventually.

They really don't know how likely something like that is. But, even though they don't know, they've just increased the chance around six times. One report from Space.com -- who knew that space had its own Website? -- says it's 10 times more likely. The Weather Channel says 4-5 times more likely than previous thought.

What does this really mean?

But, it also means that, while the likelihood of a major meteor strike is unknown, new studies show that it's even more unknown. And more in a bad way. As in I don't know how big the spider that crawled out from underneath the dash of the car is, but there's four of them. And I'm in traffic. So, that's not good.

So what do we do about it?

Well, if we're eventually gonna get hit by an asteroid, maybe we can make it less painful for everyone.

Remember Christo? The guy that used to wrap stuff in plastic? Not the guy on TV selling you a food vacuum packer, but the guy that took big pieces of plastic and surrounded islands and such with it.

Who knows? Maybe some big honkin' asteroid will fly by, see it, and head to it like moths to a flame.

Then, we'd be clear for another 30-100 years from a decent size asteroid. And clear from those idiots in Washington.