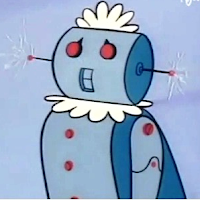 After all the things that crazy scientists are doing with robots -- self-driving cars, robot apes, nuclear snakes -- the populace still is not up in arms.

You see, we have the idea that Asimov's Three Laws of Robotics are real:
That's from his science fiction books, not his real stuff books.

One of those room-cleaning robots turned itself on, pushed a pot off the stove, and sat there and died.

Robots can go crazy and kill you, and don't care if they get hurt in the process. Don't trust a robot, that's the message.