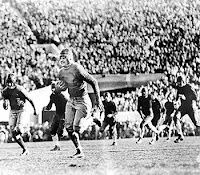 The 9th week of the 2011 college football season is upon us, and we're getting closer and closer to the big showdown in January between the SEC champion and this year's victim. Heading into the week, there are 8 unbeaten teams: two in the SEC and 6 trying to earn a spot in the game against one of them.

Except for LSU and Alabama, the top two teams, the other six don't play each other, so there could be as many as 7 undefeated teams at the end of the season. Personally, I hope that happens. Anything that helps make the case for a playoff is a good thing. If they had a playoff, Houston, Boise State, Clemson, or any of the others that are likely to get left out would truly have a chance. But the NCAA won't listen to me.

It's time to check out the schedule and see what big games are scheduled. We'll look at the matchups between ranked teams, games involving teams from my state, Frank J's state, and Harvey's state. And a few of the other games where the game is the only game on the boob tube.

If you don't like college football, you must be a Ron Paul supporter. If you do, let's see if we can figure out who's gonna lose this week.

Week 9 features some really great games. Then, there's this Sun Belt game, where the Golden Pussycats from Tamiami International Airport play host to a pack of Prophylactics from South Alabama.

It's been a rough season for the Trojans, but opening the season against Clemson and Arkansas will cause that. Florida International has had a slightly better season so far. The Panthers' running game is better than the Trojans' while Troy has the better passing game. Everything points to Florida International winning this game, but Troy is better than folks give them credit. This one could go down to one special teams play, and possible go into overtime before a winner is determined.

Another bunch of Panthers take the field, this time against a pack of Huskies from Connecticut. The Steel City Kitties are playing their last season in the Big East, and want to take a winning season to the ACC. Connecticut wants to tag along, but can't get an invite. Winning the conference might go a ways towards getting acceptance.

Steve Pederson's Steel City Panthers have dropped 4 of 5, but that's not for lack of talent on the team. Ray Graham has nearly 1,000 yards so far, already more than last season, and he could be the key to a successful season -- if he stays healthy. Johnny McEntee, the Junior QB for the Huskies needs to have the game of his life if he expects to find a way to win this game. That's not likely.

More football, more kitty cats. This time, it's Kevin Sumlin's Houston Cougars inviting the Rice Parliament over for supper. David Bailiff's Owls are in for a shock when they find out they're on the menu. The Cougars are leading Conference USA West, and could run the table. Rice doesn't look to be the team to knock them off. Case Keenum has put up some impressive numbers this year, and may just get some Heisman notice before the year is out. But they have to keep winning, and winning big.

The Kings Soldiers from the Commonwealth head down to Dade County to party hearty on the TV. When they get there they'll find a Tropical Storm heading their way. Al Golden's Band of Convicts may have turned the corner, and could content for a spot in the ACC championship game. Virginia simply needs to win. If they win out, they win the division.

The loser of this game has no chance of winning the conference. Which kind of makes this a playoff game. And games like this are as close as we'll get to playoffs any time soon.

Texas Christian's last season in the Mountain West could be memorable if they can go out conference champs. This game won't impact that, but a loss would put a damper on things. The key to this game could be turnovers. Whoever makes the fewest might just get a "W" on the board.

The Hoplite from East Lansing are on the march after having dispatched two sets of Rodents the past two weeks. General Mark Dantonio has his eyes trained on a big Farm in Nebraska, where his troops can fill their bellies and rest up for the final stretch of the season. Only Bo Pelini has other plans for the visitors.

You'd think the Big Red Thrashing Machine could spell big trouble for Michigan State, especially at home. But Nebraska hasn't gone unbeaten at home during the regular season since the 2001 season, and there's nothing the Spartans would rather do than keep that streak going.

The wheels fell off the Sooner Schooner last week, and no one was unhappier than Bob Stoops -- except the folks at ESPN, who were looking for Oklahoma to make it to the BCS title game. With that out of the way, the Sooners look to ride Landry Jones' arm to a victory over a Clowder of Cats from K-State.

The Wagon should make the trip to Manhattan without incident, and look to run roughshod over Bill Snyder's Wildcats. Kansas State is still unbeaten, and the 2nd-highest ranked team in the Big 12 11 10 9 10 Twelve. But they're hitting the toughest part of the schedule, with 4 ranked teams in a row coming up.

There's no way that Kansas State will be looking ahead. There focus will be on Oklahoma ... but that might not be enough.

Once upon a time, this would have been a matchup between two highly-ranked teams. But the fairy tale is over, both for the Tough Nuts from the State of Ohio, who are suffering a hand-slap after one of the crookedest seasons in recent football, as well as for the Badgers, whose clock struck midnight last week.

Losing on the last play of the game on an instant replay overturn may have had an impact on the Mad Rodents from Madison, and if they don't shake it off, they'll find the trip to Yankee Columbus a very unpleasant trip indeed.

The Buckeyes have played some good teams close, but come up short almost every time. If they can ride the wave of last week's upset of a Band of Indians from Illinois, they could make it two upsets in a row. But now we're talking fairy tales again.

A few weeks ago, this looked like the game of the year in the ACC, but the Yellow Jackets from the North Avenue Trade School seem to have lost their stinger. The Cats from Clemson have beaten three ranked opponents, and been just plain rude to the rest.

Dabo Swinney has taken the Tigers to a Top Five ranking and a chance to not only win the ACC, but squeeze into the BCS title game. Getting past Paul Johnson's Jackets would be needed to keep that hope alive.

The Humble Bumbles are doing what they do every year: find ways to lose. Their high-powered running game isn't putting out quite as many yard as it was at the start of the year. Orwin Smith is still averaging over 12 yards every time he touches the ball, but the Phenix City Junior's average is trending down.

Teams have figured out that the Engineers don't have a passing game. Although Tevin Washington has thrown for over 1,100 yards this season, he's struggled as of late, and Synjyn Days may get more snaps this week. Won't do much good, though, if Tajh Boyd has his typical game, and if Andre Ellington's foot is better. The Tigers are on the way up. The Yellow Jackets? Not so much.

The Giant Water Lizards from Gainesville have really hit the skids, losing three games in a row, albeit each to ranked opponents -- including the top two teams in the country. This week, they face another ranked team when Mark Richt takes his Kennel to Jacksonville for the World's Largest Outdoor Cocktail Party.

Early on in the season, this looked like it might be a matchup of a ranked team and a team on the way down. And it is, but with the teams reversed.

Georgia has shown a remarkable turnaround from its sorry performance last season and the first two games of this season. But don't worry Bulldog fans. The President of the Mike Bobo Fan Club usually finds ways to lose big games.

Coach Boom desperately needs to find a way to get the Gators back on track, and if Florida can continue its recent dominance in this annual affair, the St. John's River will be flowing Orange on Saturday night.

This whole season, Boise State has played a bunch of nobodies. This week should be no different.