You'd think after a while, I'd get used to liberals saying and doing stupid things. But, I really don't get used to it. It still amazes me that people can be so stupid and still manage to walk upright. 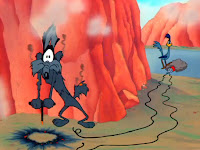 It's sort of like a Road Runner cartoon. Wile E. Coyote thinks he's a "Super Genius" but comes up with some hair-brained plan that ends with him ordering rocket-powered roller skates and blowing himself up or splattering himself against a canyon wall.

You know he's going to do it. You know his logic is flawed. But you enjoy watching him make an idiot of himself time after time.

Watching liberals is that way. Except, Wile E. Coyote was a creation of the hilariously twisted minds of Chuck Jones and Michael Maltese. Today's liberals? Living cartoons, except there are too many of them running loose, with way too many holding elected office.

Still, there's a little bit of that "watching the Coyote" thing that keeps me paying attention to what liberals say and do. Their logic is ... Wile E. Coyote-style Super Genius.

For example:
Despite the obvious fallacies in their logic, liberals get up every day, try to live according to these beliefs, fail miserably, and then do it all again.

Email ThisBlogThis!Share to TwitterShare to FacebookShare to Pinterest
Labels: Liberals