They found Han Solo. He's right where they left him, apparently, on Mercury.

Now, I don't remember Han being in our solar system. He was in a galaxy far, far away. And, it was a long time ago. Still, NASA has found what looks like Han Solo on Mercury, still frozen in carbonite. 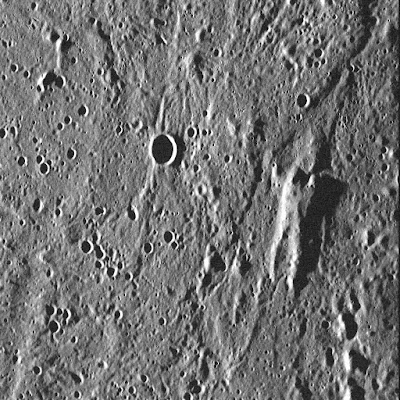 A portion of the terrain surrounding the northern margin of the Caloris basin hosts an elevated block in the shape of a certain carbonite-encased smuggler who can make the Kessel Run in less than twelve parsecs.

NASA took time out from its Muslim outreach to actually look at photos a space probe took of the closest planet to the sun, and discovered that rock formation, or lava formation, or whatever it is.

Trick of the terrain and shadows, is what it is. That makes you see things that don't really exist. Thing like that face on Mars.

Anyway, since NASA no longer knows how to send men into space, at least they can see characters from space movies that think parsecs are a measurement of time.

I'm wondering what other science fiction staples NASA will run across next. Maybe the benefits of Obamacare?
By Basil at 9/26/2013 06:00:00 AM