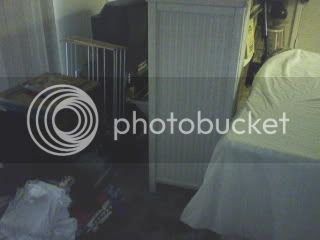 Yesterday was a busy day. And exhausting day.

Back in June, we helped the Little Princess put her stuff in storage. Because her lease was up, and the new lease wouldn't allow her to move in until mid-August.

Well, if you've checked your calendar, it's mid-August.

So, the Wife and I drove to Athens to help move stuff.

And it took us a while.

Last time, the Lieutenant was around to help us move. Well, he's at Ft. Hood, and that's just too far to drive over and help move for a day. So, it was just the three of us.

We got it done, but it took us a bit.

We got it done, but we were exhausted.

A few minutes later, I looked at the clock.

I looked at the clock.

So, I looked at the clock to confirm my calculations.

Now that was really odd. Time was distorting for me. Which meant that I was actually very tired.

Okay, time to stop for something to drink.

A quick stop for an iced honey bun and a Mello Yello only took a couple of minutes.

Back on the road, I was good for a bit, now, what with the sugar rush and the caffeine.

After a bit, though, it gave out. And I needed to do something.

Ah, one of the Wife's CDs. Merle Haggard's 16 Greatest Hits.

Okay, how many of those do I know.

Quite a few, actually, as it turned out.

So, I sang along with Merle for a bit.

The Wife wasn't too pleased with that. Perhaps I can't sing "When you're running down my country, man, you're walking on the fighting' side of me" quite as well as old Merle. But, for whatever the reason, she said we needed to stop for the night.

I decided we'd do that, but I wanted to get just a bit further.

Well, before you know it, we were in Atlanta.

And every hotel we ran across was full.

No, we didn't stop at every hotel. But we stopped at a lot.

But, south of Atlanta, we found a place.

The drive back today (notice, I didn't say "this morning") was well enough.

The Wife decided to lay down. I decided to blog. And now I'm going to the Catfish game

I'll probably sleep though it. But not because it'll be boring, that's for sure.

But, because I'm still tired.