When I saw this, I just couldn't resist. 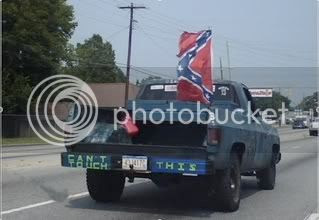 I'm driving to work the other day, and got behind a truck.

Lee County, Alabama tag on the vehicle. That's north Phenix City, Smith's Station, Opelika, Auburn, or an unincorporated area of the county that contains those cities and towns. (Yes, Phenix City is primarily Russell County, but it extends into Lee County.)

Just so you can tell what it is you're seeing, it's an old truck, with a CB antenna on the toolbox, a "3" (Dale Earnhardt) above the right tail light, an "8" (Dale Earnhardt, Jr.) above the left tail light, a torn half of the flag of the Army of Northern Virginia (some call it the Confederate Flag, or the Confederate Battle Flag; some incorrectly call it the "Stars and Bars" ... which was an entirely different flag). Oh, and "Can't Touch This" in block letters on the bumper.

I knew I wanted a picture of it. But I wasn't sure what to do with it.

So, I'm asking you to help me out.

Email ThisBlogThis!Share to TwitterShare to FacebookShare to Pinterest
Labels: Captions