The rains came in the 6th inning, but it didn't dampen the spirits of the Columbus Catfish, who won a rain-shortened game with the Savannah Sand Gnats (Mets) 4-1 Saturday night.

A 4-run 3rd inning was all the Catfish needed. CF Maiko Loyola started things with a single to center, and moved to second when CF Richard Pena had trouble with the ball. RF John Matulia reached on an infield single to short. 3B Cesar Suarez was hit by a pitch to load the bases. DH Quinn Stewart drove in Loyola on a sacrifice fly to right that moved everyone up a base. LF Ryan Royster followed with his league-leading 28th homer, a 3-run shot that put the Catfish up 4-0.

In the 5th, Savannah got one run back. Sand Gnats LF Darren Clark doubled to center, driving in SS Brandon Richey, to close the gap to 4-1.

It stayed that way until the 6th inning. Catfish reliever Wilton Noel faced one batter, getting him out. That's when the rain drove us from our seats ... and the players from the field. 32 minutes later, the umpires came out, spoke to the teams, checked the weather, and sent everyone home.

Ryan Morse picked up his 5th win of the year, his 2nd straight win following 3 consecutive no-decisions. He allowed 1 run on 6 his, striking out 2.

Offensively, the Catfish only had 4 hits, but made the most of them. Royster's 3 RBIs allowed to to tie Asheville's Mike Paulk for the league lead (92). Royster has the highest slugging percentage in the league (.582), and is 5th in the league in both batting average (.323) and total hits (147). Teammate Cesar Suarez, who scored on Royster's HR, leads the league in total hits (154) and at-bats (502), despite not having an official at-bat last night. 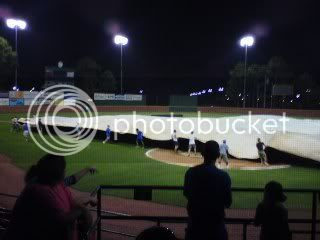 The Catfish announced that tickets for the game would be honored at an upcoming game, which they didn't have to do. According to the baseball rule 4.12(d):.

(d) Rain checks will not be honored for any regulation or suspended game that has progressed to or beyond a point of play described in Rule 4.10(c).

So, no, they didn't have to offer the tickets as vouchers to a future game. But it was sure nice that they did.

Oh, the Catfish made a couple of roster moves. Desmond Jennings (2nd on the team batting .315) was placed on the DL, retroactive to August 23. No official word on if he'll make it back to the team this year, but his number (15) was reassigned.

And that's the other roster move. RHP Jeremy Hall was promoted from the Princeton Devil Rays:

For Princeton this season, Hall was spectacular on the mound compiling a 4-1 record in 69 1/3 innings. He led the team and the Appalachian League with his 1.56 ERA and allowed three earned runs in only one of his starts. In total, he only allowed 12 earned runs in 12 games started. Over the last month, Hall had a 1.13 ERA in six starts but only managed a 1-0 record due to poor run support and a couple of blown leads by the bullpen. The likely candidate for Princeton's Pitcher of the Year award also led the team in strikeouts and innings pitched this season.