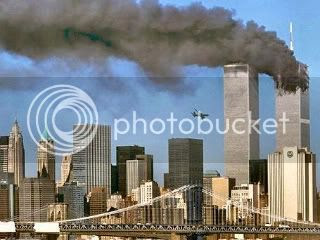 Seven years ago, on a normal Tuesday, September 11, 2001, I went to work as normal. The Wife had the day off, and was watching Fox and Friends when I left.

But this wasn't a normal Tuesday. Though we didn't know it at the time.

The Wife called a little before 9:00 and told me that Fox and Friends was showing video from a plane crash at the World Trade Center. She was still on the phone, telling me what the news reports were saying about the accident, when she suddenly said, "Another one just crashed into it. I just saw another plane crash into it. That's not an accident!"

That's when we knew it was not a normal Tuesday.

Since that day, we've had a lot of normal Tuesdays. Or what passes for normal now.

Because things changed for us that last normal Tuesday.

On September 11, 2001, we learned just how much some people hate the United States.

Some blame Bill Clinton for leaving the U.S. vulnerable. They're wrong. Bill Clinton did what he could. He did order a freeze on bin Laden's and authorized Laden's arrest. But, he blew the chance to extradite him from Sudan. However, if he had gotten bin Laden, someone else would have stepped in and planned something else.

If you want to look for someone to blame for the attacks on the U.S., look no further than those that attacked us.

If another attack happens, it won't be George Bush's fault. It'll be the fault of the attackers.