The Wife often puts up with stuff from me.

Oh, she likes baseball okay. Just not as big a fan of the games as am I.

But, every now and then, I have to return the favor.

We were heading to a football game -- nephew plays for a local high school -- but had to "make a stop first." 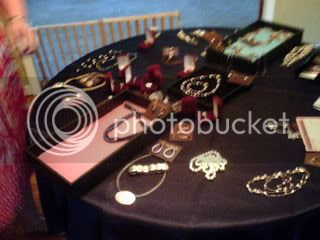 It was a Jewelry Party. Or something like that.

A friend of hers from work was hosting a party for another lady's jewelry sales.

I've never been to a Tupperware Party, but I assume it's something like that.

After all, it's not that often that I have to put up with those things.

She puts up with all my silly stuff, so I can certainly put up with hers.