The bride was beautiful

This past weekend was a big weekend for the family. My daughter married the man she's been dating for a few years. They've actually been engaged for over two years.

Army life -- such as a deployment to Afghanistan -- interfered. But, he returned earlier this year -- a captain in the Army now -- and they reset the date. And the wedding was Sunday. 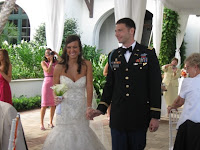 Of course, the bride was beautiful.

And I had the pleasure to give her away.

The new son-in-law is a good man. I really like and respect him.

Of course, I'm like any other father in thinking that no one is good enough for my daughter. However, if I were to have to pick out a husband for her, and I made of list of things I'd want in a son-in-law, he'd be the one I'd pick.

I know that because I've actually thought about the kind of man I'd like for her. And he fits the bill.

It was interesting in the lead-up to the wedding. The ex- and I don't communicate. We don't have any reason to. We live over 5 hours away from each other, and both like it that way. But, when a child gets married, there have to be meetings, phone calls, and, in this day and age, emails and text messages.

We managed to work together to pull this thing off. And now, the Little Princess is all grown up and a married woman now.

But the wedding wasn't the only interesting thing. The reception involved the groom's brother -- the best man -- dancing with all the bridesmaids, then clearing the floor with his dance moves.

That stole the show. 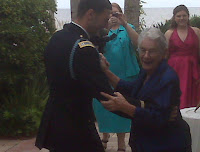 And the lady can still move. I say "still" although I'd never seen Grandma dance before. So, to me at least, it was a surprise.

It's all done, now. It's over, and the happy couple is in Italy now, on the first stop of a two-week European honeymoon.

But when the honeymoon is over, they'll face the reality of a marriage.

But, as long as they remember the passage that my son read during the service, from 1 Corinthians, they'll do fine:


Love is patient, love is kind. It does not envy, it does not boast, it is not proud. It is not rude, it is not self-seeking, it is not easily angered, it keeps no record of wrongs. Love does not delight in evil but rejoices with the truth. It always protects, always trusts, always hopes, always perseveres. Love never fails.