So exactly what was in the balloon? 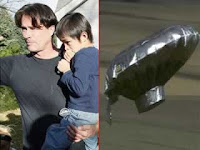 The whole world -- or at least the part of the world that had nothing better to do -- was transfixed Thursday by the saga of the boy in the balloon.

First reports said that 6-year-old Falcon Heenes was on board the balloon, and people were horrified at that prospect. When the balloon landed, and the boy wasn't found, first fears were that he had fallen out.

When he was found hiding in an attic, speculation turned to the whole thing being a hoax.

But there's one aspect that people are forgetting: since Falcon was not on the balloon, what was?

Many are assuming that it empty. But was it?

So, I'm wondering... did these investigators even check out what was in the balloon? Or did they simply say, "Hmm, kid's not here" and let it go at that. Was something else in that balloon? And, if so, what?

I have some thoughts on what might have been in that balloon:
It's hard to tell how much stuff could be hidden in the balloon, so I'm not sure how many of these items, or what else could have been on board.