A calendar ain't nothing but a number 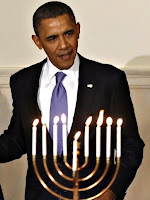 The president is celebrating Hanukkah.

Not "planning to observe Hanukkah beginning December 20th" but IS. As in now.

None of this silly waiting until the Festival of Lights actually begins, but now. Because, it's not like days ... or the number of days or anything ... really matter, right?

And, so as to not drag it all out, the president went ahead and lit all eight candles. Because, well, you know, why not. It's not like you need to light one a day or anything, right? It doesn't, like, have any special meaning, right?

While the Festival of Lights doesn't actually begin until December 20th this year, it does begin December 8th next year. So, maybe he's so far ahead on his schedule to destroy everything that he thought the 2012 apocalypse was already upon us, and used the 2012 date to celebrate Hanukkah.

Or, maybe he thinks so far outside the box -- like that book

says -- that he doesn't let the calendar dictate when he does things.

Like observing Hanukkah 12 days early. And all at once, not over eight days.

And, looking at the calendar, we need to do Christmas at some more convenient time. This year, it's on a Sunday. And, everybody knows that Sunday is for sleeping until noon, getting up, ordering a pizza and watching football. Christmas would just interfere with that. The kids will be getting up early, and messing up all that "sleep until noon" thing, which is totally unacceptable.

And, besides, some people go to church on Sunday, and we certainly don't want religion to interfere with Christmas, do we? So, we can do Christmas on the 16th. It's a Friday, the mid-month government checks will have arrived the day before so we can stop by the Dollar General and pick up some gifts. It's perfect.

And New Year's? It's a Sunday, too! How did that happen? Both Christmas and New Years on a Sunday? Actually, that's not bad. Getting all drunk and such the night before means sleeping in on New Year's Day, so, yeah, that actually works. It needs to be a Sunday every year.

St. Patrick's Day is a Thursday in 2012. That won't fly. Need to move it to a weekend. The celebration in New York is big, of course, but New York can handle a million people partying with no problem. But, if you decide you want to party but not go to New York, the 2nd largest celebration, in Savannah, nearly triples that city's population for the day. So, yeah, a weekend would help with that. I'm thinking March 12th would be good.

Easter and Mother's Day are too close together in 2012, so let's do Easter on April 1st. That way, when the kids go out to hunt for Easter Eggs, and they don't find any because we didn't hide any, we can yell "April Fools!"