Is your Obama tree properly decorated?

Students of history agree: the upcoming celebration doesn't accurately reflect the birthday of the person being celebrated. This holiday has traditions that go back far beyond the birth of the One who is worshiped by many. But, over the years, the two celebrations became intertwined. There is no actual physical proof of the circumstances of birth of the child, but there are documents and writings from around the time. Though their authenticity is questioned by some, we have enough evidence from other sources to establish an approximate date and location of the birth of the one worshiped by His followers.

So, despite Barack Obama being born August 4, 1961 in Honolulu, the trees are trimmed with decorations celebrating Him during this holiday season.

Oh, that thing in front of the U.S. Capitol? Yeah, some people still call it by that archaic name, but we can't have anything related to this "Christ" person, because of the Separation of Church and State that's in the Constitution, so...

Oh, it's in there. Somewhere. Let me look.

Okay, it's not in the first seven articles. Maybe it's in one of the amendments. Ah, here it is.


Congress shall make no law respecting an establishment of religion...


...or prohibiting the free exercise thereof

Well, that's not it. But everybody knows it's in there, even if nobody can find it. And, as a result, we can't have a tree that celebrates this Jesus person.

But, the Constitution doesn't say we can't celebrate Obama. In fact, it says we have to. I think that's in the Commerce Clause or something. Or maybe it's in the Right to Privacy section. But it's got to be in there.

So, in celebration of Barack Hussein Obama, we urge you to take that tree you have in your house and get rid of anything that has a Jesus implication. Like Angels. Except Albert Pujols. You can keep him.

And watch that Santa stuff. We don't want children getting the idea that Santa brings them things, when everyone knows Obama is responsible for the stuff you have. He lets you keep some things, and we are beholden to him for that. So don't confuse the kiddies with that silly Santa nonsense.


The decrees of the LORD are firm, and all of them are righteous. They are more precious than gold, than much pure gold

See, that could apply to Obama, so it would be okay. But, you got to be careful. You don't want people reading something into it and get the idea that there could be worship going on. Unless it's worshiping Obama, which is good. And right. And required.

What if you don't have a tree? Because you're a Jew or a Muslim or a Jehovah's Witness or an atheist or a Pastafarian or something else? Simple. Go get one. Gaia won't mind you cutting down a tree for something as important as Obama. And put up your Obama tree. Like the U.S. Capitol did.

And, be sure to have ornaments that actually mention Obama. But not Jesus. 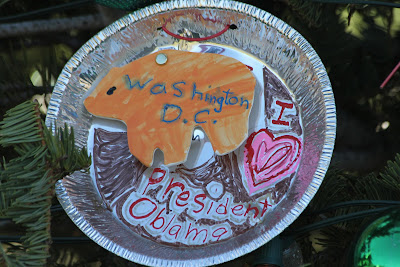