Video: Play MST For Me 3 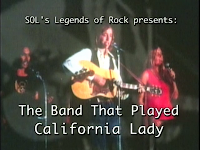 This isn't an episode of MST3K. I actually finished those, covering the last episode the other day. But, during the run of the show, they released some videos.

This is one of those videos.

It came out in late 2000, over a year after the last new episode aired, but with over three years of reruns still to go before the show finally left the air. Or left the cable. Or whatever. You know what I mean.

Like Play MST For Me and Play MST for Me 2, this is a collection of songs from the Host Segments. Or, at least, mostly songs. A few aren't straight up musical numbers. But, there's music involved in some way. 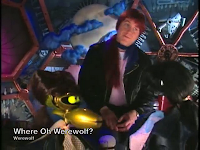 But, before I cover them, let me explain a little more about this video.

It's one of those VHS tapes that was released by Best Brains, and sold to MST3K Information Club members.

As of this writing, I'm only missing the four Best Brains-released episodes, two of the five Shorts releases, and this tape.

That's right. I'm reviewing a videotape I don't own. But, I own the content. You see, this collection was also released on DVD, and I own that. So, I do own this collection, just not in both formats. 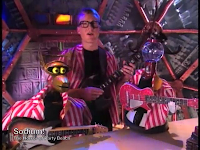 This is the most complete collection of songs from the covered three-year period. In fact, they only omitted one musical selection during the run. In Episode 1006: Boggy Creek II: and the Legend Continues... Observer sings about a mysterious creature that turns out to be Bobo.

The collection itself didn't seem to receive the care and consideration that the first two did. Whether that was because of a greatly reduced staff -- MST3K was no longer in production, after all -- or if there was an attitude of "get it out there quick and make a buck while there's bucks to be made" I don't know.

The other releases had song titles and episodes listed on each selection. On this one, that wasn't the case. I did make an edit for my own purposes that contains those (see the screen shots).

Despite the hurried approach that seems to have been taken, it's still a pretty good collection of musical numbers.

One thing they never did, but perhaps could still do: take the songs omitted from all three collections and release a fourth collection.