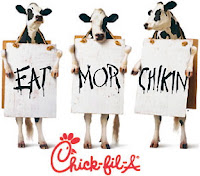 The boycott that liberals called on Chick-Fil-A last year certainly made an impact.

The Atlanta food chain released figures at the request of the Atlanta Journal-Constitution -- the chain is private and doesn't have to release numbers -- and here's what they showed: sales were up 14% to $4.6-billion, and the company opened 96 new stores.

Now, to be sure, the AJC is taking the approach that all this good financial news happened despite the boycott. The AJC is a liberal paper -- not as liberal as some, but way too liberal for my tastes -- and spins stories to their point of view.