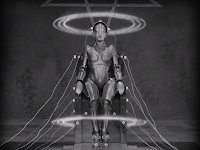 I have always been fascinated by robots. I'd laugh at the silly robots from some of the early science fiction films I saw on TV, although I loved the Class M-3 Model B9, General Utility Non-Theorizing Environmental Control Robot from Lost In Space.

as a robot, but I suppose he was. Maybe not. The chick in Metropolis

was definitely a robot, though she didn't look like it for most of the film.

The robots in a lot of Isaac Asimov's stories and novels

were always lots of fun to read about.

I even liked Johnny Five from Short Circuit

-- though the robot was cooler than the movie.

Of course, I had a Rock'Em Sock'Em Robots game when I was a kid.

I'm not sure what fascinated me about robots. Was it their near-human appearance that was both frightening and fascinating? Was it the idea that a robot could do work I didn't want to do? Like Rosie from The Jetsons

Not consciously, but maybe, in the back of my mind, that was there.

There has been an advancement in robotics. No, they haven't turned a Roomba into Rosie just yet. They've made a robot that can vomit.

They're studying how the spray can pass along viruses or something else just as disgusting.

That's a pretty specialized use for a vomiting robot. But, it still has applications beyond the laboratory. If I had one, I'd have it sit in front of the TV and watch Obama, and then vomit in disgust, so I wouldn't have to.
By Basil at 1/04/2013 09:00:00 AM