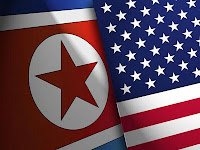 You know what's up with the ex-girlfriend of Kim Jong-un? Nothing. She's dead.

According to reports, Hyon Song-wol was executed a little over a week ago.

That's the difference between the United States and North Korea. Their dictator's ex-girlfriend? Shot by a firing squad. Ours'? Never existed.

And that's what makes America great. It used to be that someone without a real job and with imaginary friends would be wandering the streets pushing a shopping cart. Today, that same person can sit in the Oval Office.