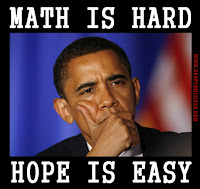 Harvey at IMAO noticed that the national debt hasn't changed for several months. He suggests that the Most Transparent Government Evah, run by the Smertest President Evah, has simply stopped doing math.

With all due respect, I suggest that Harvey is missing all the nuances of this Genius of Geniuses. It's not an abandonment of math. It's a whole new math. It's the magical math that is ObamaMath.

Here's how it works.

How is that possible? ObamaMath!

That's the same way you can have health insurance costs go up, but still be paying less. Sure, you bank account looks smaller, your take-home pay looks smaller. But that's because you don't apply ObamaMath.

A smaller bank balance is actually a raise in pay. And you can thank Obama for that. Well, Obama and his wonderful, magical ObamaMath.

And, here's a secret that many people don't know: you too can use ObamaMath.

Walk into a grocery store, fill your shopping cart with food, give the clerk a dollar, and walk out. It'll be okay. Just explain it's ObamaMath.

Bank send you a credit card bill? Send them a corrected statement back, showing a $0 balance. Explain it's ObamaMath.

There is no end to what you can accomplish with ObamaMath.