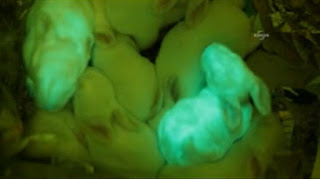 A report out of Hawaii says that scientists in Turkey have made glowing bunny rabbits. No, really. Bunnies that glow in the dark.

Okay, maybe not in the dark, but under ultraviolet light.

You're probably thinking, "That's nuts." And you wouldn't be wrong, but it's worse than that.

I mean, didn't they ever see Night of the Lepus? Or heard about the Killer Rabbit of Caerbannog? Scientists are taking a risk there.

The widdle bunnies were supposedly engineered in Turkey, a Muslim country. And using technology from Hawaii.

What other Muslim-Hawaiian connection might there be? Can you say Obama?

Is this part of some larger plan that Obama and the Moslems have hatched to destroy America? He's tried blowing up the economy for five years, and has done a marvelous job of bringing on financial collapse, but the U.S. just refused to fall. Perhaps the glowing Moslem killer bunny rabbits is the final piece of the plan.