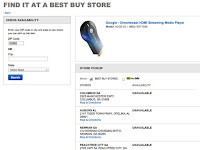 I've written about the Google Chromecast, twice, and think it's a pretty good device. Apparently, a lot of other people do, too. Google sold out pretty quick, and Amazon

And that gave me an idea: eBay.

Not to buy one. To sell one. Or several.

Only, I kinda think I want to have my own. And, I need more than one in order to sell one. So, how to sell something I don't have? That's easy to answer: get one. Or several.

But, they're sold out right?

I noticed that when I went to Best Buy and looked it up, the local store in Columbus showed "unavailable" as did the next nearest store, in Auburn. Actually, it's in Opelika, but they think it's cooler to say Auburn. War Damn Eagle, I suppose.

Anyway, I expanded the search, and what do you know. The store in Montgomery, 84 miles away, is the only store that doesn't show "unavailable." But, it's "in-store only." You can't buy it online, you have to go to the store.

So, I hopped in the car and drove my happy ass over to Montgomery. The thing is, I was there just a few days earlier. I had gone to a baseball game in Montgomery the previous weekend, but didn't think to check the Best Buy there. I thought about it on the way back, and drove the extra couple of miles taking the route through Auburn so I could stop by the Best Buy there. And, as mentioned, Best Buy in Auburn/Opelika was out.

So, this past week, I went to the Best Buy in Montgomery, walked in, and said I wanted a Chromecast.

"Your Website says you have them." I showed him. "I drove over from Columbus for one."

"As much as y'all sell technology, y'all ought to be able to use it to keep your Website up to date. The other stores say they're out."

"Um, let me check stock to make sure."

I left, went to McDonald's, and had a Big Mac, trying to figure out if I wanted to let anyone know what I had done.