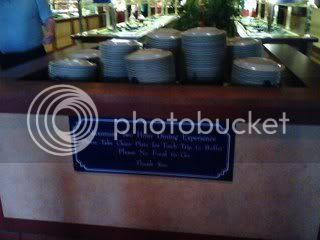 When we were in Las Vegas a couple of weeks ago for vacation, we ate a lot. Okay, truth be told, we eat a lot regardless of where we are. But, one of the things Las Vegas is known for is the relatively inexpensive food.

Only, we found out, it's not all that cheap. At least, not on the middle and south Strip.

When we went to Vegas four years ago, we found out first hand about how cheap the food was. But we were staying in the older part of town, on Fremont Street. And the buffet at the Golden Nugget (where we were staying) ... as well as the buffets at the other nearby places we visited ... were rather cheap, we thought.

But this trip, we stayed at Harrah's, on the Strip. And the food there ... and at other places on the middle and south Strip ... were more expensive. Almost twice as much as what we encountered downtown.

Now, one thing about me is that, well, I'm cheap. Okay, not cheap. But I'd rather pay under $10 instead of over $15 for the same thing, if possible.

So, after a day or so, we decided to shop for cheaper food.

We found some. At the Sahara.

The Sahara, an older hotel-casino, is up on the north Strip. The Las Vegas Monorail ends its north run at the Sahara. So, after a less-than-stellar dining experience at Harrah's that first morning, we sought out other places to eat. And one of the first we visited was the Sahara.

The breakfast buffet there was $8.99. And it was good. But it was also interesting.

They had a sign saying they had a two-hour limit on eating. I don't know about you, but it would be really, really hard for me to eat for more than two hours at one sitting. But apparently, they've had issues with that. So much so, they had to put up a sign.

And I believe it. At least, based on what I saw while I was there.

For example, some little girl that looked like Sherman Klump's niece was wandering around the buffet with a plateful of donuts. She apparently had found what she wanted for breakfast, and was wanting more. Her mom (I assume that's who that was) was offering her other items on the buffet. But Klump Girl just wanted donuts. And apparently more than a plateful, because she already had that.

On the other end of the spectrum, Olive Oyle was at the buffet, too. Like Olive, this woman I saw was so skinny she barely cast a shadow. I was torn between believing that she had to be hungry, since it looked like she hadn't eaten in a month or so ... and thinking that the tapeworm she was feeding was hungry. She was hitting the buffet, and she looked like she needed a meal for sure.

And, the food at the Sahara was pretty good. We went back.

But one place we didn't go back to was the Imperial Palace.

Yes, the pancakes. I needed a saw to work my way though them. So, if be warned.

But most of the places we ate were pretty good. None were perfect. But most were good. Some were more expensive than others.