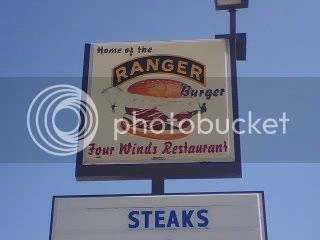 If you're on a diet, stay away ... far away ... from Four Winds restaurant in Cusseta, Georgia.

But if you're looking for a serious hamburger, head there without delay.

I've eaten there before. Just not in a while. But yesterday, I had lunch there.

If you're not familiar with Four Winds, it's the home of the Ranger Burger. Named for the soldiers -- actually for the Rangers, who, along with other soldiers -- can often be seen frequenting the restaurant.

The Ranger Burger is a pound of meat ... that's two half-pound patties ... with cheese, bacon, lettuce, bacon, mustard, and ketchup ... on a bun. Comes with fries and tea. 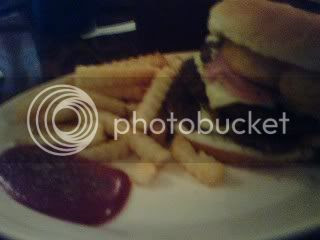 I didn't have the Ranger Burger. I had the Combat Diver: two half-pound patties, cheese, onion rings (on the burger), bacon, ham, and barbeque sauce. Almost a meal in itself! The fries and sweet tea complete the order.

Of course, it was good. And filling.

But I didn't help my cause at all yesterday. I ate the burger and hardly paused to take a breath.

They do have smaller burgers. They're only half-pound versions of the Ranger Burger. You know. For the smaller appetite.

And they have quarter-pound burgers, too. If you want to eat normal-sized food.

But, if you're in the Columbus or Ft. Benning area, and want to test your stomach, take the road south to Cusseta (most folks around here pronounce it "cuh-SEE-tuh") and stop at Four Winds. Order a Ranger Burger.