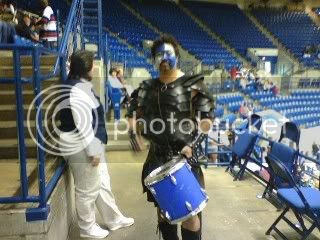 The local indoor football team, the Columbus Lions, had their home opener tonight. And it turned out sour for the home team. The Erie (PA) River Rats beat the Lions, 54-48.

A small crowd ... this is Columbus, Georgia, after all ... turned out. But at times they made some noise for the home team.

The guy with the blue and silver face paint, beating on his drum, helped the crowd sound, at times, louder than it had a right to.

Wasn't first game jitters -- the Lions won their season opener on the road against Augusta last week -- but mistakes made a difference in the game. 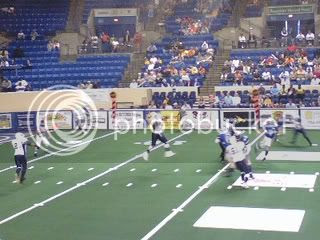 Take away any one of those 10 plays, and the Lions could have won their second game of the season.

Only, you can't take away any of those plays.

And the Lions didn't win.

Still, despite the mistakes, the Lions didn't quit. And that means a lot.

You see, several years ago, Columbus had an area team ... in af2 ... called the Wardogs. They were awful. In 2001, they went 0-16. They lost their games by an average of 33 points. While some of the players on that team had some talent, they weren't a good team.

The Lions, on the other hand, made some mistakes, but fought back. They played like a team.

They have to cut down on the mental mistakes -- they had several illegal defense penalties -- to stay competitive. They have to stay awake and alert ... and hold on to the ball. You know. Basic football.