Catfish lose in 10 to Augusta 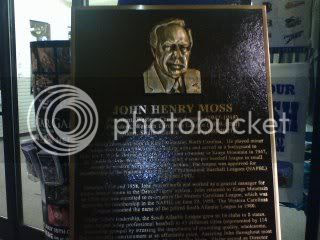 It took 10 innings, but the outcome was all too familiar. The Columbus Catfish fell to the Augusta GreenJackets (Giants) 2-1 tonight.

Down 1-0 after 4 innings, the Catfish tied it up in the 5th. With 1 out, CF Maiko Loyola singled, stole second (his 20th stolen base), then scored when RF Reid Fronk hit a sharp grounder to first that Augusta 1B Thomas Neal stopped, but was unable to retrieve the ball in time.

Things remained tied until the 10th, when Augusta managed to scratch out a run ... and the win.

Game 3 of the series is Sunday afternoon.

In a non-game related note, the Catfish honored South Atlantic League retired president John H. Moss tonight. They gave away 10 autographed baseballs, and The Wife had one of the winning numbers. And the Catfish GM, Ken Clary, looked me up during the game and gave me an autographed bobble head. He said he appreciated all the loyal fans the Catfish have had, including me, and wanted to make sure I got one of the bobble heads. That was quite kind of Ken and the Catfish to think of me ... and the other fans ... that way.

Just in case you aren't familiar with John H. Moss, he retired as president of the SAL at the end of last year. He served for 50 years, beginning back when it was the Western Carolinas League. He kept the league afloat during some lean times, and has helped the league experience unprecedented growth and success. He took the league from what was indeed Western Carolinas League, to a true South Atlantic League ... and beyond. The SAL now reaches to the Great Lakes and up to New Jersey.

So, yes, John H. Moss is a baseball man of note, particularly in the minor leagues. I certainly appreciate the gifts from the Catfish, and from Messrs. Clary and Moss.
By Basil at 5/17/2008 05:54:00 PM