That voodoo that you do so well 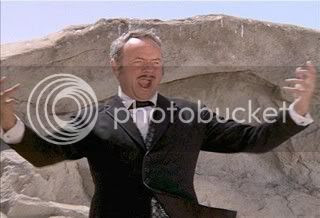 I enjoyed him when I first saw him on the Carol Burnett Show, way back when. Everybody remembers the scenes with him and Tim Conway. And, yes, those were great. But Harvey Korman was funny in whatever he did.

Blazing Saddles. That's a classic film. And I can't imagine what the movie would have been with someone else in that role. I'm sure it would have been a great, funny movie anyway. But Harvey Korman's performance in it helped make it the classic it is today. And, he was great in other Mel Brooks films.

And a few years ago, The Wife and I had a chance to see Tim Conway and Harvey Korman live in Las Vegas.

They were hilarious. And I'd love to have seen them again.

Korman died at UCLA Medical Center after suffering complications from the rupture of an abdominal aortic aneurysm four months ago, his family said. He had undergone several major operations.

"He was a brilliant comedian and a brilliant father," daughter Kate Korman said in a telephone interview with The Associated Press. "He had a very good sense of humor in real life. "