So, how big of a screw-up is Obama?

Anybody with one eye and half sense can tell that Barack Obama is a screw-up.

Some of us knew he was before he was elected. Now, everyone else is finding out what we knew all along: Barack Obama is a screw-up.

The only question remains is: how big of a screw-up is Obama?

Well, I saw today's Gallup and Rasmussen polls. And Gallup, which poll a sample of voting-age Americans, has Obama's approval rate at 44%: 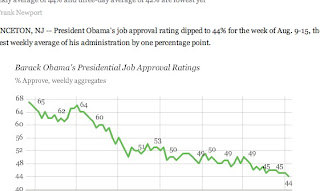 Rasmussen, which polls a sample of likely voters, has Obama's approval rating at 45%:

Now, think about that for a minute.

Gallup doesn't limit to likely voters. It includes more than likely voters. Which means those not likely to vote. Those that don't care enough to vote.

Obama is such a screw-up, that even people that don't care are pissed at him.