When this trend hits the White House... 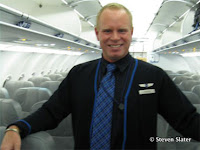 You've heard about Steven Slater, the JetBlue steward (they prefer "flight attendant") who got fed up with rude people, grabbed a beer, deployed the emergency slide, and left, quitting his job.

That led to the fake story of "Jenny," the woman who was reported to have quit her job by sending an email with messages on a dry-erase board, detailing why she quit. It was a hoax, but a lot of people fell for it, and, if it's like many hoaxes, it'll surface again.

The thing is, people believed the "Jenny" story because they want to. And Steven Slater shows how plausible it is.

Most adults, as much as they might like to, won't actually do something like that. Sure, we all dream of the day we can leave the job, often ending the notice with the phrase "and the horse you rode in on." But we won't. We're adults.

But not everyone is. Have you looked at the White House lately?

There's a president to never had a real job in his life, and is shown every day to be in way over his head. You got a first lady who dresses like someone shopping at Wal-mart at 2:00 AM. There's a press secretary who's so frustrated that not everyone is as enamored with the president as he that he says critics (specifically those on the left) should be tested for drugs. There's skateboarding down the halls of the presidential mansion. There's Joe Biden (nuff said). And the list goes on.

The obvious conclusion is there's not a responsible adult in the group.

What does that mean?

Well, adults don't act like Slater. But none of the White House crew is adult. So, when one finally snaps, what will it be like?

Who would you like to see quit the White House in a huff? And how?