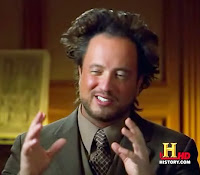 NPR, that thing your tax money is financing, has a report that a giant virus may have come from Mars.

No, I'm not making this up.

Of course, it's a bunch of French scientists that say this.

Scientists found some big ole virus they've named Pandoravirus. Like Pandora. The girl that opened the box, not the radio thing. Go Google her if you have to.

Some French fellow named Jean-Michel Claverie, who works or otherwise occupies space at Aix Marseille Université (it's French, too) discovered the virus, but says we're safe from it. It lives deep in water. And everyone knows that humans don't go near water. Maybe that's just French humans, though, which could be the source of the confusion.

Anyway, not only is this virus really really big (for a virus), but it's got some other properties that make them think it's not of this earth. At least, that the conclusion he and his wife, Chantal Abergel, came up with.


When Abergel and Claverie sequenced the genome of the new virus, they were in for a shock. Its genetic code is roughly twice the size of the record-holding Megavirus. And it seems almost completely unlike anything else on the planet. Only 6 percent of its genes resembled the genes other organisms. Claverie says he thinks the Pandoraviruses may come from a different origin – perhaps radically different.

"We believe that those new Pandoraviruses have emerged from a new ancestral cellular type that no longer exists," he says. That life could have even come from another planet, like Mars. "At this point we cannot actually disprove or disregard this type of extreme scenario," he says.

So, it's from Mars. At least, that's their conclusion because it's something they've never seen before.

I suppose if they had never seen a kitten, they'd think kittens are from Mars.

Anyway, I'm trying to decide if H.G. Wells got it backwards -- go read the book or watch the movie if this one goes over your head -- or if French scientists are nuts.