What's with the courts starting to make sense? 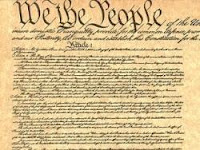 The courts in the U.S. have long been known for making stuff up as they go along. Like the Right to Abortion that they insist is in the Constitution.

The courts are like the Pharisees of old. Remember how they somehow found that you could only walk so far on the Sabbath? Or could spit on a rock but not the ground? That came about by taking the Ten Commandments, making interpretations for certain circumstances, then expanding on those circumstances and elevating those new laws to the level of the original Commandments. They didn't go back to the original Law and ask if something was in the letter or spirit of the original Law.

And that's what our courts have been doing. But recently, there have been smatterings of common sense. And I'm not sure what to think about that.

Another court has ruled that the president has violated the Constitution with recess appointments. Recess appointments are allowed, but can only be done when the Senate is ... get this ... in recess.

That's the third court to make such a ruling, and the Supreme Court gets the case in their next session.