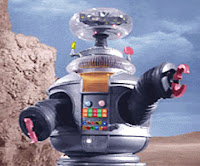 They've gone and invented Robot Snakes. That's not the 21st century I was looking forward to.

You see, when I was a child, I remember the robot from Lost In Space. That was a cool robot. There were other robots on TV and in movies. Robby the Robot from Forbidden Planet, who also played a robotoid (whatever that was) on Lost In Space, was popular with many people.

In books, the robots of Isaac Asimov were pretty cool. And, maybe the Tin Man from The Wizard of Oz was a robot. There was the chick-bot in Metropolis with the metal boobs. The gorilla in the diving helmet from Robot Monster. And, that reminds me of Tom Servo and Crow T. Robot of Mystery Science Theater 3000.

I could go on and on, but the point is, we all saw a lot of robots over the years. Every kind of robot imaginable, right?

In January, I told you about the vomiting robots. Last month, we found about about the robot monkeys. Well, somebody has topped that. A bunch of folks from Carnegie Mellon University -- do we know anybody from there? -- have built robot snakes.

Really. It's not a plot to a movie on SyFy. It's a real thing and not some Tiffany, Debbie Gibson, LL Cool J, Eric Roberts movie.

So, maybe you're thinking, hey, that's cool. They'll be able to snake their way (get it?) through some really difficult to reach places and, I don't know, do robot stuff.

Sure. And guess where they're deploying them? Nuclear plants.