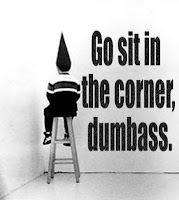 There's a new report out that says Americans are dumbasses.

According to an Associated Press story, Americans scored lower than average in math, reading, and problem-solving.

Turn out that Japanese, Canadians, Australians, and Finnish adults all did better than Americans. Now, I knew the Japanese were smart. Resourceful, too. You gotta nuke 'em to make 'em quit. But Canadians? Now, don't get me wrong, I have nothing against Canadians or Canadia as a country. They're like Americans, but without all the accomplishments. Unless you count hockey. Even then, it's been 20 years since a Canadian team won the Stanley Cup. Rowsdower would not be pleased.

And Australians? They gave us Yahoo Serious.

I won't say anything about folks from Finland, because I don't that's a real place.

Anyway, Americans all scored lower than those people. That means we're dumbasses.

Unless the test is wrong. Or something.

Maybe it was written in Canadian or Australian. That could explain it. Or maybe all the questions had to do with beer. As much as Americans drink beer, I think the Canadians and Australians would be hard to beat in a beer-drinking contest. Of course, what else is there to do in Canadia or Austria/Australia (whichever)? Stalk moose or crocodiles?

But, then I remember the 2008 and 2012 elections. I'm thinking the test is right. Americans are dumbasses. Or, at least, 52% of Americans are. And that puts us below average.

The good news? When the Finlandfolk come at night to take over America, riding elk to the sound of the Karelia Suite, after they conquer that 52%, the rest of us will swat the Finns like flies. Of course, we won't do anything until they've captured the 52% and taken them back to work as slave labor, tilling the frozen land. As a sign of good faith, we won't ask for the 52% back.

Anyway, with the dumbasses gone, America will score higher on tests. In fact, we'll write our own tests and laugh at the Canadians, Australians, and Finlanders as they try to take them.