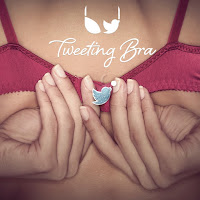 Now they have a bra that tweets.

According to a report in Times of India, there's a bra that sends a tweet every time it's unclasped. It only tweets in Greek, though. Which, I assume, means the guy undoing the bra from its wearer is looking directly at the clasp. (Some of you will get that. The rest of you, don't worry about it.) But enough of that.

I have a feeling, though, that it won't be long before this technology is used for less worthwhile causes. Like promoting Obamacare.

For instance, every time a body bag is zipped up, the Obamacare Twitter account tweets that the Death Panels have scored another win.

Until that day -- and it's probably not that far off -- we're content with Greek Boobie Tweets.