A job for Obama 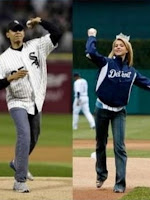 After January 20, 2017 -- a date which can't come soon enough -- Barack Obama will be in a position he's placed millions of Americans in: he'll be out of a job.

But, he has his eyes set on a new job already: he wants to host SportsCenter.

Now, some people laughed when they heard that. But consider: he has the qualifications.

For instance, I bet you thought the NBA team in Miami was the Miami Heat. Not so. Obama knows what no other person on this planet knows: it's the Miami Heats.

His bowling prowess is legendary. Not only did he bowl a 37 when he was running for president, after he took office, he compared his bowling skills to Special Olympics. That's the kind of skill and commentary that's missing from sports today.

Of course, he would bring a unique perspective to our nation's pastime. Not just the mom jeans, or his little sister pitching style, but his unique knowledge of Chicago's Kaminsky Field, which most residents of the Windy City don't even know exists.