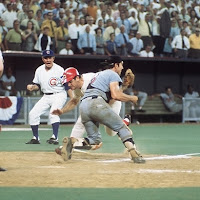 Major League Baseball plans to change the rules so that catchers won't be able to block the plate, and runners can't target the catcher.

You know the deal. Runner on the base path heads for home. Outfielder throws to the plate. Catcher stands just down the third base line to grab the throw and tag the runner out. Collision at the plate.

July 14, 1970. Riverfront Stadium in Cincinnati. The All-Star game. The National League had tied the game at 4 with a three-run bottom of the ninth. Now, it's the 12th inning. The Angels' Clyde Wright is pitching in relief. He had thrown a no-hitter a week-and-a-half earlier and was in the middle of a 20+ win season. He got the first two batters, then the Reds' Pete Rose and the Dodgers' Billy Grabarkewitz hit back-to-back singles, putting runners on first and second. The Cubs' Jim Hickman then singled to center, and the Royals' Amos Otis fired the ball to the Indians' Ray Fosse who was behind the plate. The ball was just to the third-base side of the plate, and Fosse was in position to take the throw. Rose hit Fosse, who wasn't able to field the ball, and scored the winning run.

Those that were watching the game on TV that night -- me included -- will never forget it. That was a classic baseball moment.

Fosse was hurt on the play, but continued his career until 1979 when a different injury ended his career. He made it back to the All-Star game the next season, and won two World Series rings with the A's in '73 and '74.

Rose was later banned from baseball for gambling.

Today, we have a commissioner who thought a tie All-Star game was a good idea, because it was late and people were tired. They had played 11 innings, after all.

No, it was no longer the 1970s when a 12th inning collision at the plate was how an All-Star game ended.

And now, the ladies that run Major League Baseball will make sure that never happens again.