So, what did you get for Christmas?

It's been a few days. You've had time to recover. Somewhat. 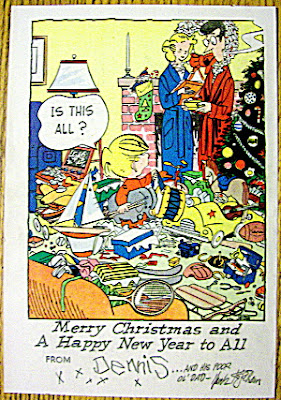 Now that the mess is all cleaned up ... or at least pushed aside so it's not completely in the way ... let's share our Christmases. I want to know what you got for Christmas.

I got time with the children, and with my grandson.

My son and his wife live in Brunswick, in coastal Georgia, about 20 minutes from his mother (X1). He worked every day but Sunday and Christmas, and I managed to spend some time with him, but not a lot. They were doing the thing where you spend one evening with one branch of family, another with a different branch, and so on.

My daughter, her husband, and son live near Boston, where my son-in-law is now attending business school. He's a former Army officer. They are spending the holidays (Solstice, Christmas, Kwanzaa, Boxing Day, New Year's Day, St. Basil's Day, the Epiphany, and whatever else is going on) in southeast Georgia. I drove over last week and spent several days there. I haven't had the opportunity to spend much time with my youngest grandson. He was born in Germany last year when his father was stationed there. I had the chance to visit when he was only a couple of weeks old. I saw him in July at my birthday when they moved back stateside. They've been in the Boston area since then, and this was the first face-to-face visit since the summer.

He was a little wary, and always clung to "Mama" and "Dada" when I approached. It wasn't just me. He did his grandmother (X1) the same way sometimes, too. After a couple of days, though, he didn't mind me holding him. And, the day after Christmas, when his mother and father wanted to go to the movies, he and his Papa got to spend some time together. We took turns pushing his stroller, walked around the mall for a while, shared a sandwich, and played Talking Tom on the iPhone. He likes it when Tom screams after you punch him in the foot.

After taking him back to his Granny's house, we played for a little longer. When it got to be late, I said my goodbyes ... he told his parents and grandmother "bye bye" and walked to the door with me. That was heartwarming and heartbreaking at the same time. The next day, his other grandparents were driving down to St. Simons, and they certainly deserve to spend time with him without my gumming up the works. So, that concluded the Glynn County portion of the trip.

Afterwards, I thought back on the time I got to spend with him, with the children, and with the rest of the family. I smiled, but then uttered the words that are often happy words, but on that day, seemed so sad: "Siri, drive home."

I had a good Christmas.

Email ThisBlogThis!Share to TwitterShare to FacebookShare to Pinterest
Labels: Christmas, The Usual Stuff