All the Whos down in Whoville 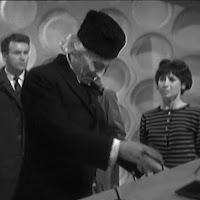 It's that time of year. I'm never ready for it, but then, one day, it's suddenly upon me.

Quick background note: I went cable-free around three years ago. Wanted to do it because I thought it'd be cool. Wouldn't do it until it was cost-effective. I can use Hulu Plus, along with Amazon Prime, Amazon Instant Video (the stuff that's not included with Prime), and iTunes to watch all the TV I care to watch. (Not completely true, but the cost savings made it easier to give some shows up.)

Watching TV via the Internet is great for me. I watch everything on demand, and, if I want to catch up on a show I haven't seen, I can binge-watch. Kinda like what Frank J. did with Breaking Bad recently.

So, that's when I start looking for older shows. Shows that are no longer on the air, but I never watched, but I heard are good shows. That's how I watched Battlestar Galactica (the 2005 version). I was all caught up on everything else, and said "Hey, what the heck." And, I liked it. Got weird at the end. Jimi Hendrix weird. Overall, though, I liked it.

Well, it's that time of year again. And, I've been hearing how great Doctor Who is. So, maybe I'll watch that, I thought.

Just kidding. I had no desire to watch Doctor Who.

I remember Doctor Who from way back. Used to catch an occasional episode starring Tom Baker on PBS many years ago. I thought the whole thing was silly. Not Monty Python silly. Just silly.

But, I kept hearing about how great Doctor Who (the current version) was. So, I looked into it. And, I found out it wasn't really a reboot, but a revival. They kept the original timeline in place, and began the 2005 series with the Ninth Doctor.

Mmmkay. Maybe this won't be the JJ Adams-ing of Doctor Who. Maybe I would watch it.

But here's the thing about me. I'm the kinda guy that will watch something from the start. I won't watch a Part 2 without having watched Part 1. A few years ago, I decided to watch all the Academy Award® Best Picture films (along with other movies considered the "best"). I got to the two Lord of the Rings movies. Lord of the Rings: The Return of the King won Best Picture. Now, I could just watch that and meet my goal. But that's the slacker way of doing things. No, I had to watch the first two movies in the trilogy first. And I hated each and every minute of it. Yes, I know, a lot of people -- good people -- love those movies. But not me.

What's that got to do with Doctor Who? Well, there were 26 seasons before the Ninth Doctor. 26 seasons. That's, like, more than a dozen. Almost two dozen. And, 20-30 episodes per season. Sometimes more.

I still thought the whole thing about the TARDIS looking like a Police Call box was kinda silly. But, then I found that Hulu was carrying many of the old classic episodes. Including many, many more than you can find on Netflix or Amazon. So, I started watching the episodes. And, lo! and behold! There in the first serial (4-episode "An Unearthly Child"), I get the answer to why the TARDIS looks like a Police Call Box. Kind of an obvious answer, but one that I never picked up on before.

Now that the TARDIS appearance issue is resolved, there's no reason to not watch them all. All 26 seasons. At least, of the episodes that are available. That's still a lot.

And, it's perfect timing, too. I've met the First Doctor, his granddaughter Susan, and the two school teachers The Doctor kidnapped. And, I'm expecting to meet his other relatives, including Cindy Lou Who, who's not more than two, in the upcoming shows.

Email ThisBlogThis!Share to TwitterShare to FacebookShare to Pinterest
Labels: Doctor Who, Technology, Television