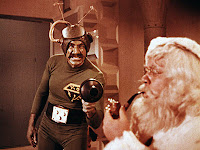 The big hoopla right now is ... no, not the president's lie about keeping your insurance. No, not the NSA unconstitutionally monitoring your phone calls. It is, of course, the controversy over Santa Claus being white.

Or was. I mean, dead Greeks are white, right? Like 3rd century dead Greeks. Most Greeks today, and for centuries, have skin that's a little darker than mine, but lighter than some other people. Now, there are Caucasoid, Mongoloid, Negroid, and Australoid races. Early classifications included Australoid as Negroid, but that's no longer the case.

Maybe that's not the Santa Claus you were thinking of. Sinterklaas, perhaps? Well, Sparky, that's the same dude. That's St. Nicholas in the Netherlands and places like that. And he's really white.

But, does that mean he's only for white folks? That's just plain silly.

Now, if Santa's being white pisses you off, that's your problem. If you want to work Santa into your Christmas celebration, that's fine. And, if you're not yourself white, and want to dress up like Santa, go ahead. There's nothing wrong with that.

Heck, if you're a woman and want to dress up like Santa, that's fine too. Hell, dress your dogs and cats up like Santa. It's all good.

It's Christmas. Enjoy the season. If you want to get all worked up over black and white stuff, you can do that the rest of the year. Or, just become a Democrat. Then, you get to be all black-white divisive all year long.
By Basil at 12/17/2013 05:00:00 AM