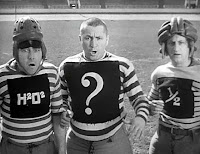 Next year, the NCAA begins a 4-team playoff for the college football national championship.

This is in addition to the three other college football national championships the NCAA already has: Division 1 FCS (1-AA) on January 4, 2014 in Frisco, Texas; Division II on December 21, 2013, in Florence, Alabama; and Division III (the Amos Alonzo Stagg Bowl) on December 20, 2013, in Salem, Virginia.

Division 1 FBS (Division 1-A), finally gets a playoff of sorts next year. This year, it's still the BCS. And, as always, it's true that you can't spell BCS without BS. I don't know what to say about next year's "playoff" other than it's a half-ass attempt to get it right.

The questions are how to pick the "wild card" teams, and how to seed the teams. Minor details. But, the major details are the 16-team field with the conference champs.

Now, how to pick the "wild card" teams? I'm gonna use the Coaches Poll. Or the BCS standings. They are close, but not quite the same, both in teams and in ranking.

First, the easy part: Here are the conference champs, who get an automatic bid:

I'd seed them by Coaches Poll, champions first -- kinda like the NFL does -- and match the teams up with Number 1 hosting Number 16, Number 2 hosting Number 15, and so on. And, I'd let the teams that lost in the first round still go to a bowl. The first-round losers will either be a conference champion, or a top 15 team. Most bowls would jump at either.

Put a 16-team playoff like this in place, and, whoever is left standing at the end, whether it's an eighth-straight SEC team, a team from the Sun Belt, or one of the other quality teams on this list, and you'll have a true national champion.
By Basil at 12/10/2013 02:00:00 AM