Apparently this is news 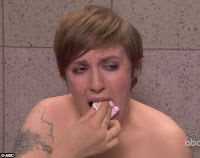 I saw a report that the producer of Girls went on a tirade when asked about nudity on his show.

Hey, nudity. That's always good for a laugh. So, I clicked the link and read the story. When I was done, I knew less than I did when I started.

First, what's Girls? I mean, I know what girls are; I've even helped produce one. But, apparently, Girls is a TV show on HBO. Now, if I had cable, maybe I'd know more about what's going on. But I'm kinda thinking not. I used to have cable, but didn't subscribe to HBO. And, a long time ago, when I did subscribe to HBO, I found that I rarely watched it, which is why I dropped HBO. And, later, dropped cable.

But, here's what I can tell you. It's a TV show on HBO. That's pretty much it.

I looked into it a little bit, and best as I can tell, it's set in the largest melting pot of America and is about four white, heterosexual women. Like Sex in the City, but not because, well, it's just not. Lena Dunham is the star.

I know, "who is Lena Dunham?" I don't know. Some liberal feminist chick who who wants to promote diversity and same-sex marriage by starring in a show about four white, heterosexual women. And, she apparently walks around naked in the TV show a lot. Having never seen the show, I can't vouch for this. But, apparently, she walks around enough for a reporter to ask about it and the producer to go nuts about the question.

You have been warned.

Anyway, she's apparently somebody, and when someone else gets his panties in a wad about a question about her, it's news.