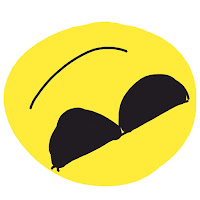 Have you noticed the change in the sun lately? It's upside down!

According to a report in The Independent, NASA says the sun has flipped upside down.

What they don't go into a lot of details on is: why did the sun flip?

That's right, Global WarmingTM is so bad, it flipped the sun upside down.

Now, I know what you're thinking. There were more record low temperatures in 2013 than record high temps, so that means Global WarmingTM is on the decline. Well, no. And yes.

It got so hot here on the earth that the heat had to go somewhere. And where did it go? To the sun, of course. There's heat there already, and heat attracts heat. So, all the Global WarmingTM jumped off the earth and headed to the sun at an estimated 300,000 miles per second. So fast, it hit the sun so hard it flipped it upside down. And, with all the Global WarmingTM running off in space, it got cold and we got all those record cold temperatures.

So there you go. Proof that Global WarmingTM is real.

Now, go buy yourself some carbon credits, because they keep temperatures down. Because if you don't, it'll get so hot that, within 20-25 years, Global WarmingTM will get so bad, it'll flip the sun upside down again. And who knows what could happen then.
By Basil at 1/01/2014 04:00:00 AM