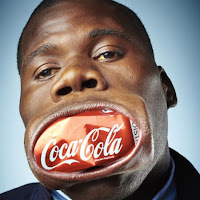 You heard about the data breach at Target. Then, the one at Neiman-Marcus. But now, Coca-Cola has been hacked.

Think about that for a minute. You might have Coca-Cola in your refrigerator. Which means there's hackers in your house. Or your Westinghouse!

And, if you don't, there's still the chance you've ordered a Coke at a drive-thru. That means you ended up with a Quarter Pounder, Large Fries, and Russian Hacker in the bag.

Hit the break room at work? Put a dollar in the machine, and it dispenses a security threat in a 20-oz bottle.

There's no hiding any more. Hackers are in your wallet, on your Facebook and Google machine, and now in your soft drinks.