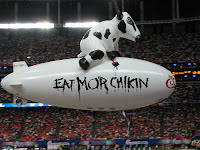 A report from Germany says that cows blew up a shed at a farm in Rasdorf.


Methane gas from 90 flatulent cows exploded in a German farm shed on Monday, damaging the roof and injuring one of the animals, police said.


Why were cows collecting the gas? What do they have in mind? Are they plotting against us? Did we dodge a bullet here, and the cows tip their hand by accidentally blowing themselves up?

Here in the US, cows are best known as advertising icons for a chicken restaurant. Well, that and giving milk. And...

Maybe that's it. Maybe they don't like being in sammiches. So, why are they collecting their farts to blow things up in Germany? Well, what's the most famous sammich in which you'll find cow parts? That's right. Hamburgers. And where is Hamburg? Yep, in Germany.

So, what do we do? Nothing. The hamburger was actually invented in the US, not in Germany. Stupid cows don't have any idea what they're doing.

I'm not saying it's okay that cows are blowing things up in Germany. I'm saying that the Germans got it under control. They don't need out help. If any country knows how to wage war on a group, it's Germany. That's why the terrorists don't attack them.
By Basil at 1/28/2014 04:00:00 AM