The robots get their own Wikipedia 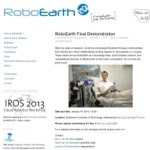 Did you hear about RoboEarth? It's like Wikipedia for robots.

Think about that for a minute.

Wikipedia is used by a lot of people as information on which they base their thoughts, actions, and attitudes. It's a real-life example of people thinking that because it's on the Internet, it must be true.

And, of course, that's bunk. Because I can put stuff on Wikipedia. Me! I mean, have you ever read the stuff I write? And Wikipedia will let me put stuff out there for other people to use.

And I have put stuff on Wikipedia. And you can, too. And, some of you have.

Pity the poor souls that don't know any better than to believe anything I write. Or that some of y'all write.

Anyway, now the robots got their own Wikipedia. And that's a scary thing. What if some robot edits an entry on humans saying that robots are supposed to kill all humans?

Okay, I admit that there could be a benefit if some humans left the gene pool, but all humans. 100% of humanity wiped out? I'm not in favor of that.