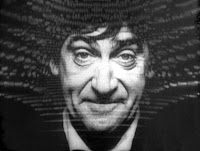 The Classic Doctor Who fourth season was, as the third, difficult to watch. Part of it was the storylines, particularly early in the season, but most of the problem is that most of the episodes don't exist. None of the serials are complete.

As mentioned before, the missing episodes have been reconstructed by fans using the audio from the TV broadcast (which still exists), while stills from (or representing situations in) the episodes are shown. The reconstructions are augmented with text describing the action where it's not obvious what is happening.

The other reason that Season Four was so hard to watch were the stories. William Hartnell's last full serial, The Smugglers (4 episodes, all missing), was about pirates. It was the first episode for new companions Polly (no last name, played by Anneke Wills) and Ben Jackson (Michael Craze). Since the Ben character was a British seaman, the pirate smugglers and ship setting fit right in. For him. I'm not a fan of the Rum And Sodomy stories, but I managed to stay awake through them.

Hartnell left the series at the conclusion of the next serial, The Tenth Planet (4 episodes, 1 missing). The missing episode from that serial is the last one, where The Doctor dies after battling the Cybermen. He is, of course, replaced by The Doctor. A clip of the regeneration (they called it "renewal" at the time) exists, so the grainy black-and-white footage of the closeup of Hartnell's face, illuminated by a bright light, morphing into Patrick Troughton's face still exists.

Troughton's Doctor took some getting used to, but he actually eased viewers (okay, me) into it by getting used to it himself. He looked himself over, checked out his surroundings, and referred to his previous incarnation in the third person. It was as if he was getting his bearings, clearing his head, trying to remember things, trying to ease himself into the situation. He did a good job on that. I accepted him as The Doctor about the same time he did. In his first serial, The Power of the Daleks (6 episodes, all missing), the Daleks seemed to recognize him, so that emphasized that he was, indeed, The Doctor, despite the appearance and personality changes.

The Highlanders (4 episodes, all missing) was the only historical episode of the fourth season featuring the Second Doctor. It took place after Battle of Culloden (1746), where the Duke of Cumberland defeated Charles Edward Stuart. The serial introduced Jamie McCrimmon (Frazer Hines), who would become The Doctor's long-time male companion. Make of that what you will.

The Highlanders was another Rum And Sodomy episode, with much action taking place on British ships.

A science fiction staple I hate is Atlantis. I've never seen a good TV show or movie featuring characters from Atlantis. And, the serial The Underwater Menace (4 episodes, 2 missing) was no exception. It would have been tolerable had Joel and the Bots been there to enjoy it with me. As it was, it was as bad as Undersea Kingdom, minus the MST3K crew.

The Macra Terror (4 episodes, all missing), was the first one to feature an image of The Doctor in the opening theme. The next-to-last serial, The Faceless Ones (6 episodes, 4 missing) was actually pretty good, despite most of the episodes only being available via reconstruction. But the real reason I bring it up is because that's the episode where Polly and Ben leave The Doctor. The action took place immediately before and ended on the same day as Season Three's The War Machines, meaning that, as far as the normal Earth timeline is concerned, they never left. Which means Ben never went AWOL, and was spared the lash, or whatever the 1966 equivalent was.

That meant that the season would end with the entire cast -- The Doctor and his companions -- all being replaced. Another companion, Victoria Waterfield (Deborah Watling), was introduced in the final serial of the season, The Evil of the Daleks (7 episoded, 6 missing). That episode also featured the second appearance of a Beatles song. Paperback Writer was playing on a jukebox during a 1966 scene (yes, the song was current for the time in the story). In Season Two's The Chase (1: The Executioners), The Doctor and his companions watched The Beatles perform Ticket To Ride on television.

One other thing about The Evil of the Daleks: Jamie, who's from 1746, understood what The Doctor meant when he said some items were from the Victorian Era. In case you forgot, she didn't take the throne until 1837.

One final note: Patrick Troughton died here in Columbus, Georgia, in 1987. There are rumors he was having sex with a fan at a sci-fi convention being held in town when he had a heart attack, but I can't confirm that (the having sex part; I can confirm the sci-fi convention was in town). Troughton was a notorious horndog, but that doesn't mean he was using his Sonic Screwdriver when he died.

I'm not from Columbus, by the way, but I moved to this area some years ago. And not because of the Time Lord-killing sex. That's a bonus.